Cookie preferences
This website uses cookies, which are necessary for the technical operation of the website and are always set. Other cookies, which increase the comfort when using this website, are used for direct advertising or to facilitate interaction with other websites and social networks, are only set with your consent.
Configuration
Technically required
These cookies are necessary for the basic functions of the shop.
"Allow all cookies" cookie
"Decline all cookies" cookie
CSRF token
Cookie preferences
Currency change
Customer recognition
Customer-specific caching
Individual prices
PayPal payments
Selected shop
Session
Comfort functions
These cookies are used to make the shopping experience even more appealing, for example for the recognition of the visitor.
Note
Statistics & Tracking
Affiliate program
Facebook Pixel
Google Analytics
Track device being used
Categories
Vorteile
Our service for you
Vorteile
Our service for you 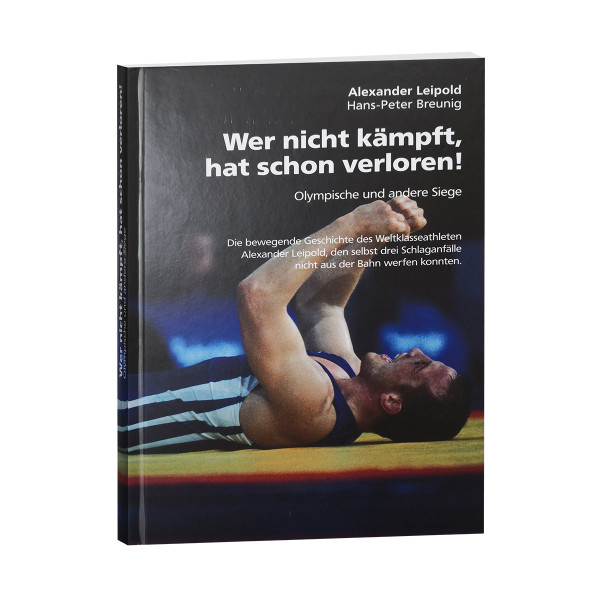 He who does not fight has already lost!

Description
Description
If Alexander Leipold doesn't like something at all, then that's losing. And because winning... more
Close menu

If Alexander Leipold doesn't like something at all, then that's losing. And because winning can't always work out, he has set himself the goal of becoming so strong that losing from his vocabulary disappears. In his moving life story, he tells how he went from being a no-chance wrestling beginner to winning the Olympic Games is rising. When he loses the gold medal on suspicion of doping, he fights until he is rehabilitated - the fight lasts ten years, but he wins. And when he fights again.. If he wants to become Olympic champion, he suffers three strokes.
But Alexander does not give up - he also defeats this life-threatening threat and wrestles again. He becomes national trainer, Let's Dance dancer, "The perfect dinner" chef-winner, Champion of the year - but above all Alexander Leipold will be an ambassador for all people: Never give up. There are always new and achievable goals. Because: Who does not fight has already lost.. Alexander Leipold is one of the most successful wrestlers of all times: 34 German championships, multiple World and European champion, 17 international medals - more successful i can't. Together with sports journalist Hans-Peter Breunig, the charismatic ambassador of German stroke care has written a gripping book that not only Gives friends of wrestling sport interesting insights into a sport life with successes and failures.

About the author
With his numerous World, European and German championship titles and his victory at the Olympic Games in Sydney in 2000, Alexander Leipold is still considered one of the most successful wrestlers in the world today.